Gerald Scarfe on how he loved to loathe Thatcher 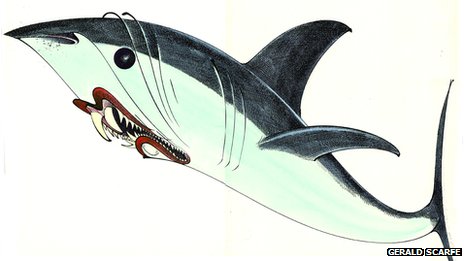 Scarfe depicted Baroness Thatcher as cutting, biting and aggressive
Satirical cartoonist Gerald Scarfe, famed for his often grotesque depictions of the late Margaret Thatcher, recalls lampooning her on a weekly basis during her heyday, and also that - despite loathing her politics - he misses her.
What is your take on Margaret Thatcher's death - your images did not pull any punches did they? 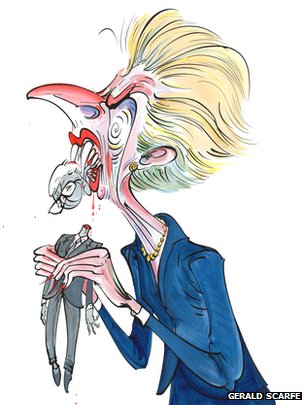 Scarfe was never afraid to make his images grotesque
I suppose the first one I did of her was in Private Eye where I drew her as top bitch at Crufts and Edward Heath was a little turd dropped on the ground underneath. The great thing about her was she was fantastic material.
I was not a fan of Mrs Thatcher, but she was undoubtedly a strong woman. In the case of caricature, she had a character that comes through - I could always draw her as aggressive or cutting or biting, like an axe or scissors or something that was really, really attacking.
Whereas for some of them like John Major and David Cameron, they're just so bland that there's not much one can do with them, but she had a very definite personality and that really does help a cartoonist or caricaturist to make something of them.
It's a bit like in theatre, where the villains are the best ones - they're the ones everyone wants to see. No one cares about bland heroes.
Did you relish it every time she hit headlines, sharpening your knife in preparation? 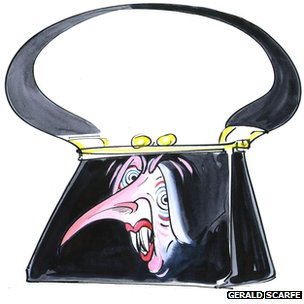 Famous Old Bag immortalised the prime minister as a handbag
I almost literally do sharpen my knife, I have a very sharp pen that I use with a steel nib, and I found I could cut into her almost like a scalpel cutting into a body.
So I was able to really get at her and depict her as all sorts of things from a shark to a handbag.
But then you know there were also things like the [sinking of the Argentine cruiser] Belgrano - I made a drawing for the Sunday Times called The Ghost of the Belgrano, where all the sunken ghosts were coming back to haunt her in the middle of the night when she was in bed - a nightmare for her.
Did you ever meet her?
No. I don't like to meet my victims, shall I call them that? Although I've been in the same room as her. Of course there was a huge buzz around the spot where she was, very much like the queen bee, but I don't like to meet them for two reasons.
One, I might like them, and two I might dislike them. And that's not really the point - I should be distanced from them. I should judge them on their policies and not whether I like them or not.
What is your lasting impression of her? 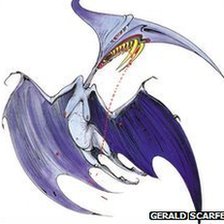 Torydactyl is Scarfe's favourite depiction of Margaret Thatcher
I'm sure people would say she did some good things like selling houses to council tenants, but in general, what I disliked about her was her rather cold, indifferent and greedy attitude. She brought about a greedy society in many ways. It was each for their own and not worrying about the lame and the poor. It was "push on and make as much as you can", and that I think is her real legacy.
She did do one great thing for me, I must tell you. There was a palaeontologist from Dorset who found a fossil of a prehistoric flying reptile. He named it after me because it looked like my caricature of Margaret Thatcher, depicting her as a Torydactyl.
He said it was because of the way I drew her with a sharp, probing nose. He named it Cuspicephalus scarfi after me, I am very honoured. If I had to choose, it is my favourite image of her, because it turns her into a mythological creature, and also I'm proud of the fact that she actually made me millions of years old.
You touched on the fact you found John Major and David Cameron bland to draw - is she one of your stand-out subjects for caricature? 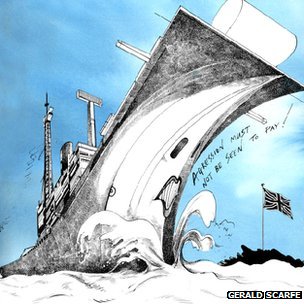 Scarfe had strong views on the sinking of the Belgrano
Yes, most definitely.
There are those that stand out - some like John Prescott and Ann Widdicombe and Boris Johnson who are caricatures already.
She wasn't exactly that, but she did have this strong personality, and there was always that aggressive, hard-hitting, aquiline nose - a probing, piercing creature.
I always started with her nose, this flourish of the pen which brought about the beak-like nose.
In actual fact, her nose wasn't that big but the thing with being a cartoonist is that you can convince the public bit by bit that what you're seeing is that creature.
It's a kind of shorthand really to getting the personality across, like Tony Blair's ears.
They're big but they're not that big.
Where did all these cartoons appear?
A lot of them were in The Sunday Times - I've been working there for 46 years now unbelievably, doing political cartoons every week. I also work in the New Yorker and I produce independent prints and have exhibitions.
In terms of other political responses to your cartoons, what did other politicians ever say to you about your depictions of the Iron Lady? 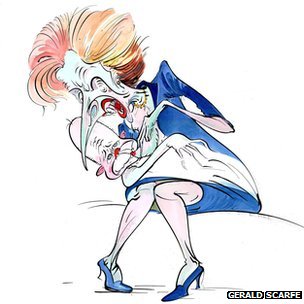 Scarfe said some of his cartoons ended up in the smallest room in the house
When it comes to politicians themselves, they very rarely react to their drawings. In fact the awful truth to it probably is that its all grist to their mill - they'd rather have some publicity than no publicity.
Some of them write to me and people have asked me to buy the originals or whatever. And I know that some politicians do have a collection of cartoons, usually in their lavatory.
All the cartoons are always in the lavatory: "Oh you must see the most amusing cartoon next time you are having a pee," they say. Whereas my friend David Hockney hangs in the drawing room, I'm in the lavatory.
Did you miss drawing Mrs Thatcher when she bowed out of public life?
I did yes. I found it difficult to go to John Major who was much blander really, and there's not much you could say about him. He was a grey figure as we know. But she was colourful and exciting and all these things. I shouldn't be saying this, but talking from a cartoonist point of view, she was very, very good material.

More on This Story